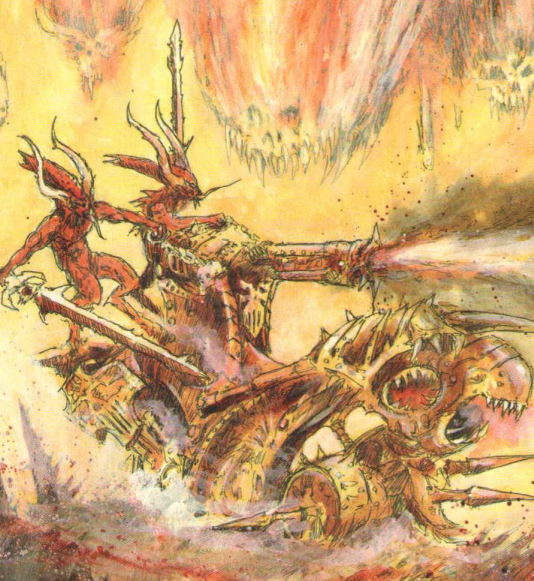 Let’s face it, Daemons are not known for their shooting. Matching the fluff, they are an army whose primary strengths are board control, melee damage, and psychic control. That doesn’t mean the Daemons codex is entirely bereft of shooting options, and a surprising amount of them are actually worth considering competitively.

Before we dive into the competitive value of the Daemons shooting options, I wanted to get one thing out of the way: I love every single shooting option in the codex, and wish more of them were as awesome on the tabletop as they were in the fluff. Meltas are cool. Shooting your enemies with the burning skulls of slain warriors is way cooler. Shame one is so much better than the other in 9th Edition. Let’s dive into the units, starting with the Tzeentch units because they have the most primarily ranged units in the codex.

Note: Daemons have a lot of niche shooting options tagged onto primarily melee focused units, such as an additional whip attack on the Bloodthirster of Unfettered Fury. For the sake of brevity, I’ll just be writing today about units whose primary damage output is ranged attacks. You don’t want to spend your free time reading paragraphs about how to optimize the ranged damage output of the D6 whip attacks on an Exalted Seeker Chariot. Let’s jump in!

Exalted Flamers are really good in 9th edition, but not because of their shooting. 3 shots at S9 AP4 and d3 damage seems decent on paper, but at only 18” range and taking the Heavy penalty whenever they move, they consistently underperform in terms of damage. That being said, they are the perfect for the Raise The Banners secondary, since they are a Character that moves 10” and has the Infantry keyword. They can reliably and safely raise banners on turn 1 on mid-field objectives behind a wall of Nurglings and then chip in with some weak shooting for the rest of the game. They have a place in competitive lists, you just have to bring them with a specific plan in mind.

The Infernal Enrapturess has an odd mix of rules, including a shooting attack, that add up to an interesting package but fall just short at her current points cost. She has the choice between six S4/AP1/1D/18″ shots and one S8/AP3/3D shot at 24″. You might view the flat 3D as a nice counter to the upcoming 3 Wound Heavy Intercessors or Custodes, but the truth is she’s only killing a Heavy Intercessor in cover 37% of the time, 29% of the time if there is any -1 to Hit. And her other rules (a boost to summoning, bringing back a slain model in a Slaanesh Daemons unit on a 6+, and making opposing Psykers perils on any doubles instead of just double 1’s/6’s) are unlikely to have any impact on the game, with the exception of the perils aura in psychic heavy matchups. She basically has the same benefits of an Exalted Flamer in terms of raising banners but in the HQ slots instead of the Elite slot, which is a tough sell given how crowded the HQ slot is for Daemons. She’s a nice option to summon in against psyker heavy opponents, but on the whole she is tough to justify in a competitive Daemons list.

I’ve wanted to write about Flamers for a while, but I held off simply because I wanted to keep getting more in-game reps in with them to confirm they were as good as I initially believed. I’ve practiced with them against a few strong tournament opponents recently, and they both had the exact same reaction: “Show me the codex because you must be misplaying something, there is no way they are that good… Holy crap, why are more people not running these?” Their reputation has not caught up to their tabletop performance yet.

Flamers received a stratagem in the Engine War book called Flames Of Mutation, that for 1 CP let’s them do 1 Mortal Wound in addition to the normal damage on unmodified (so note, it doesn’t stack with Flickering Flames) Wound rolls of 6+. A lot of people glossed over this at first, but other than the Exalted upgrades for our Greater Daemons, this is by far the single biggest upgrade any Daemons unit received in Engine War. The blend of high volume of auto-hitting AP1 attacks combined with an average of 5-6 Mortal Wounds on top makes them extremely effective against a wide variety of targets. With a Herald nearby and Flickering Flames cast upon them, on average they both wipe out a squad of 30 Ork Boyz and do 14 Wounds to a Knight.

I won a game against a Space Wolves player recently by using the Flamers to one-shot an Impulsor that had a 4++ invuln save, so Ragnar inside had to get out, at which point a Bloodthirster nearby was able to charge and kill him. These are the kinds of plays Daemons simply did not have available to them before Flames Of Mutation was printed.

And the actual unit itself has a ton of utility in 9th Edition missions. They have the <INFANTRY> keyword while moving 12” with Fly, meaning they’re excellent for playing the missions. I often use them to Raise a Banner on an objective behind some Obscuring terrain turn 1, and then from turn 2 onwards I use angles around terrain to roast anything my opponent sends into the mid-field (knocking units like Intercessors off objectives easily) while minimizing return fire.

Flamers are a great, great unit. Give them a try sometime.

Pink Horrors are a great screen, and outside of some Marine builds, many armies will struggle to find the shooting to reliably clear a large pool of single wound, 4++ invuln bodies off objectives. Their shooting remains fantastic against hordes, and even with the lack of AP, they still are capable of packing a punch against most targets when combined with Flickering Flames.

So why don’t I rate them higher? All the Troops of the other God’s choices are so good at their respective roles, it’s tough to find a reason to bring Pink Horrors at the moment. If you want board control then Nurglings or Plaguebearers generally fit better, if you want damage then Bloodletters provide much higher damage at the cost of a slightly worse invulnerable save, and Daemonettes are necessary for keeping Slaanesh detachments pure for their crucial locus. Pink Horrors are a fine choice if you want to run them, but it’s hard to justify them if you’re looking to the optimal pick for your Troops slot.

Just like Exalted Flamers, Skull Cannons are solid–but not really for their actual shooting. Their shooting is a bit overcosted, and the combination of D6 shots and D3 damage (with no way to mitigate either of those like the Imperial Guard get) means that they’re entirely too swingy to rely on. However the actual unit is rather useful, mainly because they received a stratagem Bound In Brass And Bone in Engine War to halve incoming damage when targeted for the duration of the phase for 1 CP… which is really nice on a T7 unit with a 5++ invuln and a big base. Bringing one Skull Cannon to hold a backfield objective or screen out deepstriking opponents is an entirely fine play, but any more than that and you’ll be spending too many points for mediocre offensive output.

One cool note about Skull Cannons is that their cannon has the wording “ignores cover”, rather than the newer wording of “ignores the benefit of cover to saving throws”, which means that they also ignore the -1 to Hit penalty of shooting through Dense Cover. You can set your Skull Cannon up on a backfield objective behind some Dense Cover where it will provide a durable objective holder (-1 to Hit, T7, 3+/5++, potentially half incoming damage) while chipping in some minor but non-negligible firepower. For 90 points, that’s really not bad.

The Defiler’s more daemonic cousin, the biggest issue with the Soul Grinder entirely comes down to points. Getting a 4++ invuln save if you’ve marked it Tzeentch, or 5+++ feel-no-pain if you’ve marked it Nurgle, is great. But at almost 10% of your entire army’s points, they just don’t do enough offensive damage to justify the inclusion. And because of how spread out the model’s legs are, actually positioning it to move around the table or end a charge near the unit you want can be a real issue on denser 9th Edition boards. This unit has a lot of potential–check back after the next Chapter Approved points change, because if it gets a similar points drop to the Defiler then 3 of these as Nurgle or Tzeentch suddenly would provide a massive pain for your opponent to deal with at a decent cost.