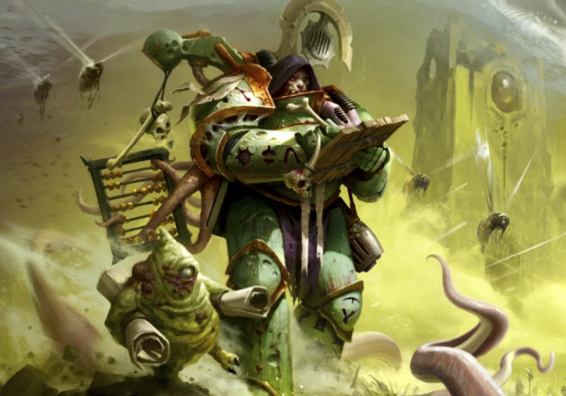 After a week of rumours that new 40K FAQs were going to drop soon, Games Workshop finally delivered. Basically every rules source in the game, from the core rulebook to the still active 8th Edition supplements, received updates in today’s FAQs. We’re going to go through every FAQ document today and tell you what Chaos players need to know.

Nurglings do not receive a Feel-No-Pain against Mortal Wounds

Q: Are mortal wounds considered to be an attack with a Damage
characteristic of 1 for the purposes of a Nurgling’s Squishable rule?
A: No. That means that this rule cannot be used against mortal
wounds.

A long time minor rules controversy finally gets settled. Many people were already playing it this way, and this was the common ruling at tournaments, so this will have little effect on Daemons players. Nurglings remain strong, even if they’re gradually slipping competitively due to struggling in the increasingly common Necrons matchup.

Nurglings go up from 18 to 22 PPM. This isn’t entirely unjustified, but I would have liked to have seen a points drop somewhere else in the Troops slot to accompany this nerf. It’s a bit rough for pure Nurgle Daemons players to have to choose between 9 PPM Plaguebearers or 22 PPM Nurglings. Both units are fine, but hard to get excited about at their points cost.

Both units receiving 5 PPM points drops is a great sign for hardcore Daemons players. As our faction exploded in popularity this year, we became Codex: Amazing HQs and Troops With Nothing Else in many people’s eyes. Hopefully this is a sign that more love will start being shown to the other slots in the codex, which have been barren competitively (Beasts of Nurgle, Flamers, and Furies aside).

Plague Drones in particular look intriguing, as they now cost as much as Beasts Of Nurgle for similar defensive stats. Giving up 1 Wound in exchange for Fly, greater movement, and better offense is now a tradeoff worth considering.

The interesting part is that Death Guard Daemon Princes specifically got a big points drop, as the points costs for their new codex were revealed. This indicates that points will be dropping for Daemon Princes as other Chaos codices get updated, which bodes well for Daemons when they eventually get their 9th Edition codex.

While most Chaos Space Marine points drops are very minor or just affected wargear, Bikers, Raptors, and Warp Talons all received major points drops. Raptors in particular become especially appealing at a mere 15 PPM. Raptors in Creations of Bile/Night Lords/Emperor’s Children/World Eaters were already an intriguing unit, and at their new points cost all Chaos players should consider experimenting with them.

There is no way to sugarcoat this: This is an absolutely massive blow to Psychic Action Secondaries.

The issue now is that almost every army without Psykers still has stratagems or relics/traits to deny Psychic Powers, such as the Adeptus Sororitas and Black Templars’ abilities to deny a Psychic Power on a 4+. These factions can now also use those stratagems on your Psychic Powers.

This is a huge, huge blow and takes Psychic Ritual from “Really underrated if you build for it” to “nearly useless”. Psychic Actions are already risky enough, and competitively we want to be reducing variance. The fact that your opponent can just prevent you from gaining 15 VP 50% of the time even if you manage to try the Ritual all 5 turns is crushing.

‘The players roll off. The winner takes the first turn.’

Not Chaos specific, but this is an interesting change. The fact that you can’t choose to go second if you win the roll-off may change how people deploy. Hunkering down against aggressive shooting armies and forcing them to “waste” a turn offensively by making them go first was fun, but this change could have implications that will take some time to become apparent.

At the very least, it’s a nice change when facing the person who would win the roll-off, then spend 5 minutes thinking about whether they wanted to choose to go first or second.

Player going second scores at the end of Round 5, not the start

It’s great to see GW willing to make some major challenges to solve the issue of going first being too strong on Primary scoring.

One of the big issues was that previously, on turn 5 the player that went first could freely go all-out denying the second player Primary points. Because their scoring was finished, they could abandon all of their objectives while moving and try to rush the second player’s objectives. It’s nice to see that the second player will get a chance to reclaim those objectives before the final round of scoring. This is an interesting change, and we should all look forward to seeing how it ultimately affects 9th Edition scoring.

After the nerf to Psychic Actions discussed above, this was the exact change Chaos players needed to see. Lists bringing fewer than 5 Character Psykers will no longer give up max points for Abhor The Witch, and non-Character Psyker units like Rubric Marines and Pink Horrors will only give up 2 points per kill.

Abhor The Witch remains brutal, but it makes running 3 or 4 Greater Daemons much more appealing. A list like a Lord of Change, Great Unclean One, and two Keepers of Secrets only gives up 12 VP if you get tabled, whereas previously it was a nearly guaranteed 15 VP.

Bring It Down nerfed

This is a great change for Monsters/Vehicles under 20 Wounds. Armies like Imperial Guard will be the main beneficiaries, as their Sentinels now give up only 1 points and their tanks only 2 points.

This doesn’t benefit Daemons too much, despite Greater Daemons now only giving up 2 points instead of 3. Opponents can still stack Assassinate and Abhor The Witch on our Greater Daemons for a painful 6 VP each time they kill one. However, if you were running a list focused around Iron Warrior Dreadnoughts or still running multiple DiscoLords, this is a change you are happy to see.

While We Stand We Fight affects units, not models

‘If you select this objective, then before the battle you must
identify which three units from your army (excluding models
with the Fortifications Battlefield Role) have the highest points
value…

This is a change that will take a while to understand the full implications of, but the potential ramifications are huge. A unit that becomes a fascinating WWSWF target is Pink Horrors, with splitting points left over to make it tough to kill. You could start with a unit of Pinks, use enough splitting points to keep it alive when it’s focus fired, and then hide it once you run out of points.

This will affect other factions more than Chaos, as our most expensive units were often single models already. This is a nerf to factions like Marines (and Tau, unnecessarily), so a slight buff to Chaos by comparison.

Eradicators, Inceptors, and Outriders all receive 5 PPM points increases. In addition, the potential jank of the Apothecary being able to revive 80 point ATVs finally got explicitly prevented. While not directly related to Chaos, it is definitely nice to see GW reigning in some of the more egregious balance violations in the Marine codex. Anything that helps us bring more Death To The False Emperor is a good thing.

Overall Rating for Chaos: B+

The Nurgling point nerf is unfortunate, but they’re still a great unit. We all knew a Nurglings points bump was coming eventually. And in exchange, it is nice to see GW deliver some slight points nerfs to a few key Marine units.

The bigger issue is to overcome is the blow to our Psychic Action Secondaries, as Psychic Ritual and Mental Interrogation were our best chances to recoup the points given up to Abhor The Witch. Chaos players will adapt, and it’s encouraging that Abhor The Witch received a corresponding nerf.

Thanks for reading, and as always: Stay safe, have fun, and may the Dark Gods bless your rolls.