No Rest for the Wicked: Why Daemons Collapsed Competitively as 9th Edition Went On (And How to Fix it!) 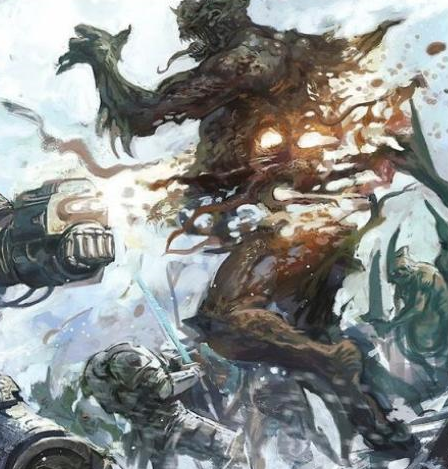 Before we go on, I want to clarify two points. In this article, we’re going to be discussing Daemons as a mono-faction. Daemons undeniably still have a role in Chaos soup, mainly because they patch glaring holes in the other codexes. We’re also going to be discussing tournament play. If you just play Daemons in a Crusade campaign against a few mates, that’s awesome and they’re perfectly viable. If you don’t play competitively, don’t feel discouraged from having fun with your Daemons. Now let’s dive in.

Oh, and one more caveat. The plural of the word codex is codices. I don’t like that word. “Codices” sounds like a scientific term for an organ belonging to a rare species of insect. I’m going to use the word “codexes” as the plural of codex in this article instead of “codices”. That’s the great part of being an adult. You can just do stuff like this and no one will stop you. Wild.

Games Workshop currently sells 20 faction codexes, not counting supplements or White Dwarf additions. Only 3 of those 20 codexes have a longer podium drought than Chaos Daemons, according to the stats compiled by the great team at 40Kstats.com. These three codexes are (Chaos fans, avert your eyes. I’m warning you right now. Chaos fans, TURN BACK NOW):

There remains a perception among many people that Daemons are still a top-tier army. I have to admit, I think this comes from people that don’t actually play the faction and just see it appear occasionally in highly ranked Chaos soup lists. Let’s go through every matchup, and figure out which ones the supposedly top-tier Daemons are favored in:

The one thing competitively Daemons can hang their hat on is that they kick Custodian butt. Don’t get me wrong, spanking those beautiful golden boys is fun, but one favorable matchup against a common army does not make an army top-tier.

What Changed for Daemons?

The Changing Meta Around Secondaries

Daemons were one of the hottest factions early in 9th Edition, crushing people at events over the first several months of 9th Edition (albeit in a much smaller sample, as most places were in deep lockdown at that point). Most people didn’t really understand 9th Edition, and Daemons naturally fit the new missions very well.

These days, I feel every good tournament player you face is much more aware of denying Secondaries. Go-to Secondaries like Deploy Scramblers have become much harder to achieve as people bring cheap units to screen their deployment zone. Armies like Grey Knights and Scions that have outrageously good deepstrike shenanigans can still Deploy Scramblers very effectively, but simply putting a unit of Furies into deepstrike for 1 CP doesn’t guarantee you 10 VP like it did earlier in the edition.

Engage On All Fronts remains solid, but Daemons basically have to skew hard into durable builds that abuse While We Stand We Fight to keep up with 9th Edition codexes. Daemons, more than basically any 8th Edition codex, need some updated faction-specific Secondaries. The army just doesn’t do much damage in many matchups, and the gap in our ability to play the mission isn’t large enough to make up for that anymore.

Nurglings went from 18 to 22 points in early 2021. While an understandable nerf, a 22% point increase on any faction’s best unit would probably knock them down a peg.

Undivided Daemon lists worked excellently before the Nurgling nerf. 20-30 Nurglings basically guaranteed you dominance in scoring Primary over the first few turns. The rest of your army was free to do damage and disrupt the opponent’s plans while your endless tide of ObSec Nurglings ran up the score. Without dirt cheap Nurglings to patch over the faction’s gaps, the inability of Daemons to execute an offensive gameplan against good opponents has become more exposed. The Nurgling nerf didn’t receive much attention at the time, but in hindsight it ushered in the end of many competitive players giving Daemons a shot as a mono-faction.

Dark Eldar are crushing everyone these days, so Daemons aren’t alone. Still, it has to be said: Daemons just get absolutely destroyed by Dark Eldar. Some readers have asked me if I’m going to write an article on beating Dark Eldar with Daemons, so here is my honest answer:

But with zero ability to threaten Raiders at range, Dark Eldar just completely run over Daemons. They do horrific damage to our Greater Daemons in shooting, and have complete control over where the melee engagements happen with their mobility, screening, and combat tricks. You simply can’t show up to a Drukhari matchup without a plan for opening Raiders and expect to win, and Daemons literally don’t have any tools in the codex that can do that.

There are two specific builds that may have a game into Dark Eldar: Beast of Nurgle spam, and Daemonette spam. Lots of units of 10-20 Daemonettes is weirdly tough for Drukhari to deal with. But to any Daemon players wondering, “How can I beat Dark Eldar right now?”, my advice would be to wait for an FAQ that puts reins in some of the worst combos from their new codex and supplement.

What’s Next for Daemons?

Let’s cast aside all the doom and gloom and look forward. Daemons remain one of the coolest model lines in the game, and I (and many others) want to keep playing them at tournaments. And that is still very possible.

But here’s the honest truth about playing Daemons at a high level these days: Souping has become mandatory. You just can’t hope to find success if you don’t have a plan for blowing Raiders open as soon as they become visible. Let’s explore our options.

I’ve been experimenting with souping in Chaos Knights, particularly Lightning Lock Moiraxes/Autocannon War Dogs/Magaeras/Castigators in an Infernal household, and have been blown away by how deadly they are. I say this with no exaggeration, a list that has 1000-1250 points of Chaos Knights can literally tear down 7 or 8 Raiders a turn if they get line of sight. Knights in general are seeing their stock go up as armies simply can’t shoot down Knights while also killing Dark Eldar efficiently, and Daemons are positioned very well to benefit from Knights as allies. I’ve been doing a lot of playtesting and list writing with Chaos Knights lately, so keep an eye out for a future Warphammer article taking a deep dive into playing Chaos Knights.

Thousand Sons and Magnus remain excellent partners for Daemons. Leviathans with Storm Cannons in the Cult of Duplicity for teleporting shenanigans are a great option for bringing firepower to bear on Raiders. Infernal Gateway and Astral Blast are also solid options for early damage from mobile Characters, as they often deploy their Raiders clustered together tightly behind a piece or two of Obscuring terrain. Emperor’s Children and Death Guard also pair very well with Daemons. Emperor’s Children bring spike shooting and melee damage that pairs well with Daemons’ durability. Death Guard bring the Foul Blightspawn to guarantee Slaanesh Daemons fight first even when charged. Death Guard also make Plaguebearers seem absurdly overcosted at 9PPM when they can bring Poxwalkers for 5PPM, but that’s a discussion for another day. Mortarion is also an excellent (and fluffy!) partner for Nurgle Daemons, as he is a counter to the aggressive melee Marine builds that would otherwise be a counter to Nurgle Daemons.

I love Daemons, and know many other people do too. Which is why its been frustrating seeing them dip competitively against the last couple new codexes, and watching many players abandon them for Chaos soup or another faction entirely.

You can absolutely win games with mono-Daemons these days, but players seeking tournament success have to be open to souping Daemons with other factions. Daemons just have too many glaring deficiencies compared to most of the newer codexes. It’s okay, though. We remain absolutely top tier in the “Factions Ranked by How Many Talking Chickens They Have” standings, and no amount of Drukhari dominance can ever take that away from us.

As always, stay safe, have fun, and may the Dark Gods bless your rolls!

Note: If you’re interested in supporting the growth of Warphammer, feel free to check out Patreon.com/Warphammer and join the team. Additional benefits and coaching are available.