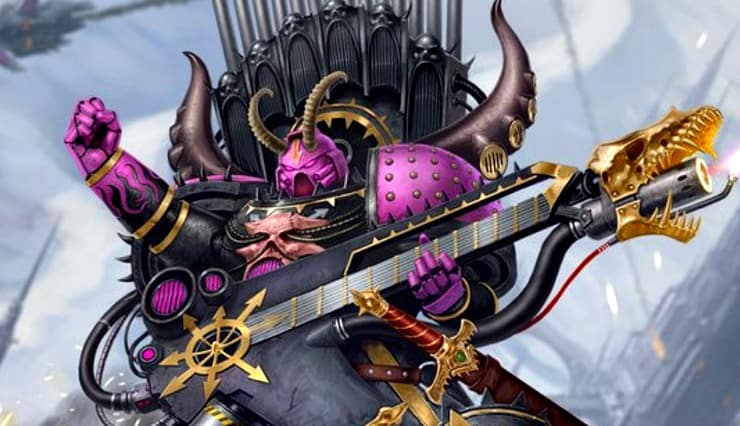 Small datasheet changes lead to big repercussions in the world of Chaos.

I’ll start with reviewing the individual units and then talking about all of the impacts they have on the armies of Chaos Space Marines, Death Guard, and Thousand Sons. Let’s jump right into it.

New Special Rule: Martial Legacy. Essentially the new way to dictate which units are “relics” of the legion. If a unit has this rule on its datasheet, it means you have to pay 1 CP to take it. This completely degrades all units with this rule because they will eat up precious CP before the game starts.

Decimator: 5/10 Up to 12W, costing 160 points, and having a rough degrading profile means this guy got better in some places and worse in others. Maybe worth considering because it can function in a similar role as a Dreadnought without having to pay a CP for Martial Legacy

Contemptor: 6/10 Down to 9W, no degrading profile, Martial Legacy, BS/WS 3+, -1 damage on all incoming weapons, lost the HELBRUTE keyword, and somewhere in the realm of 150-190 points depending on the loadout. Again this model got better in some places and worse in others. I’d argue it’s going to stick around longer on the table due to -1 damage, but is worse for wear due to -1CP and losing the Helbrute Keyword.

Leviathan: 6.5/10 Martial Legacy, starting BS/WS 3+, -1 damage on all incoming weapons, lost the HELBRUTE keyword, and somewhere in the realm of 220-250 points. Seems to be decently durable for its price. It may stick around on the table longer than previously due to -1 damage, but Martial Legacy costing you a CP per unit to take prevents me from putting this guy higher.

Deredeo: 6.5/10 Similar story to all the other dreadnoughts. Down to 12W, Martial Legacy, starting BS/WS 3+, -1 damage on all incoming weapons, lost the HELBRUTE keyword, and somewhere in the realm of 210-220 points. I think this might be the slight winner of Dreadnoughts for its fire output and durability given -1 damage. Overall spending CP to take units does not feel efficient.

Greater Blight Drone: 9/10 All changes to this model are huge positives. A 14″ move, 9W, 3+/5++/FnP, BS/WS 3+ are all huge upgrades to this model. Having a Strength 7 Ap-1 flamer, a reaper autocannon, and 5 S6 AP-2 melee attacks that all reroll ones to wound is amazing. All this for 125 points means that this unit is an absolute steal. This is a better foetid-bloat drone by all accounts, and should see a lot of tabletop play soon.

Dreadclaw Drop Pod: 11/10 Down to 9 wounds, 12″ move, Fast Attack slot, but changing melee attacks to Str 12 AP-4 3 Damage is a net positive. 115 points. Can still transport Infanty, Jump Pack, Terminators, Cult of Destruction, Helbrute, or Contemptor models. The one change that gives this unit its amazing rating is the addition of the drop pod assault rule, allowing you to deep strike turn 1 with this transport. The impacts of the turn one deep strike for Chaos are wide and vast, and will be talked about in the following section.

Blood Slaughterer: 4/10 Similar in points and role to a Maulerfiend with slightly different strengths and weaknesses. Overall not impressive in the current meta.

Land Raider Achilles/Proteus: 3/10 Neither of these units changed significantly enough to warrant serious competitive use.

Sicaran Tank Variants: 3/10 All have Martial Legacy, but none share the -1 damage of the Dreadnoughts. Slightly pricey and nothing standout about their profiles or damage output. GW seems to not have a fondness for Predator-like units.

Scorpius: 2/10 Losing the ability to doubleshoot, having Martial Legacy, and costing a similar amount of points that it previously did leaves this unit in the do-not-take pile.

Rapier Carrier: 5/10 Clocking in at 85-95 points for a single T5 5W model is rough. However this unit can put out serious firepower. Feels a bit glasscannon-y, and chaos now has a much better way to glass cannon. I don’t think this will be seriously seen at the top tables.

Termite: 8/10 Gaining 4 wounds, guaranteed 5 shots on it’s meltagun, gaining cheap twin volkite chargers (8 shots at str 5 2 damage) and doing more damage in combat for an increase of 45 points means this unit is still solid. It’s a transport that deep strikes and can do serious damage if ignored.

Heltalon: 5/10 Meddling shooting damage output, meddling durability for 200+ points just to be able to drop an orbital-bombardment like bomb twice per game really doesn’t do much for me.

Helblade: 8/10 135 points for 8 BS 3+ autocannon shots seems a little too good to be true. 9W chassis with a built in -1 to hit and mobility out the wahzoo means that this unit can do damage anywhere on the board. May very well see significant competitive play

Xiphon: 3/10 Martial Legacy, 200+ points, meddling durability, and only having anti-tank weapons restricts this unit from being great. Take a contemptor or Deredeo instead.

Storm Eagle: 4/10 This model didn’t change significantly enough to be considered in competitive chaos list. Plus it has Martial Legacy now…

Chaos Lord of Wars: <5/10 I’m going to bunch these up into a single category. None are significant enough or provide synergy enough to pay the cost of a LoW detachment.

What Do these Changes Mean for CSM, DG, and Tsons?

I’ll start with the DG and Tsons, as those got shafted back to 5th edition.

Tsons: Cannot take a single Forgeworld unit. Unless GW throws in an errata like they did with the previous book, no FW for you.

DG: Only has access to the Greater Blight drone. Amazing unit and will see a lot of play.

Unfortunate GW felt the need to exclude these two armies from Forgeworld.

Chaos Space Marines: OH BOY. HERE WE GO.
WE’RE TURNING THE VOLUME UP TO 11 FOR THIS NEXT SECTION.

So before we get into the huge impacts to the CSM army, let’s discuss the great standalone units from the book.

The Greater Blight Drone and Helblade are amazing for their points. These units will see competitive play because they are potent, fast, and decently durable on the cheap.

All dreadnought variants may be seen on the table at one time or another. Paying 1CP is rough, but essentially getting -1 Damage all the time for that CP means that it may be worth it to take these units.

The Terrax drill got beefier, now a serious threat along with being a transport that deep strikes is a net win. Will see competitive play.

Unfortunately all of these units suffer from the fact that they are single model vehicles. Some may be better than others, but they suffer from the anti-vehicle/elite meta that currently exists. They all also don’t provide significant synergy to other CSM units and builds. Here’s where it gets crazy.

Say goodbye to Grav Pods and hello to Noise Pods

CSM shooting has suffered from the serious downplay of 24″ range and delivery methods that were sub par to the loyalists. All units were limited by their ability to get in range to shoot, not by their damage output.

The change to the Dreadclaw to make it 15 points cheaper and allow a turn 1 deepstrike have serious effects for the future of CSM. Almost every strong CSM shooting unit is Infantry and thus can fit in this drill. There are even some assault units that benefit significantly from this change. Let’s talk about units that want to fit in this drill:

Noise Marines: 11/10 Being troops in an EC detachment, having a +1 Damage/Strength stratagem, and doubleshooting means this unit can put the HURT on the FIRST TURN. The first turn change now means the opponent will have less (or no) ability to spread out to screen their important units. On top of this, this ObSec unit can charge automatically from reserve on the first turn. Heck, even Noise Marines from any other chapter can still put the damage down. Cannot rate these highly enough. Emperors Children Noise Marine Pods are the new Grav-Pods.

10 Noise Marines in Emperors Children in a pod comes in at ~315 points. This unit can put out 48 Strength 5 Damage 2 and 8 Strength 8 Damage D3+1 shots with +1 to hit and wound. Without rerolls, that equates to 15 dead intercessors, 24 wounds to a rhino/knight chassis, 24 dead warriors, or 12-15 dead Nurglings/Scarabs. This unit does fall flat against 2+ armour saves. However, because you have the option to deep strike them on turns 1-3, I’m confident you’ll find that you can choose their targets such that that these guys will always find bite.

Hands down one of the most damaging units across all of Chaos and now we have a way to deliver it almost anywhere on the first turn without retaliation.

Terminators: 8/10 You’d think Terminators wouldn’t be affected by a drop pod. This drop pod can transport them, allowing them to deep strike on the first turn. This opens up shooting & charge opportunities on the first turn with Emperors Children, World Eaters, and Night Lords.

Possessed: 8/10 Emperors Children possessed charging on the first turn is strong. This can seriously disrupt your opponents game plan. I’d rate these guys higher, but their damage can really fall flat against some targets.

Khorne Berserkers: 8/10 First turn deepstrike really helps get these guys to where they need to be. Having the +1 charge WL trait from World Eaters is almost a necessity. Would rate a lot higher, unfortunately an 8″ charge, even when re-rollable, isn’t reliable enough.

Chaos Space Marines: 8/10 Actually being able to charge first turn in Emperors Children, and having a bunch of chainsword attacks means this ObSec unit can actually do a lot of damage. Obsec charging from reserves is STRONG at playing primary.

Chosen: 7.5/10 Worse versions of havocs and Noise Marines as a shooting unit. Still great for special weapons and pumping out firepower. As a melee unit in Emperors Children, Chosen auto charging on the first turn with a bunch of special weapon attacks can really give your opponent a headache.

Obliterators: 7/10 Allowing first turn deepstrike is strong for this unit. Can pump out a significant amount of firepower. Still a little swingy and fragile.

Overall, the Forgeworld change is a net positive for CSM. Unfortunately, DG and Tsons don’t get any of the toys. There are some stand out single units, like the Blight Drone and Helblade that are cheap, fast, semi-durable, and damaging. The Dreadclaw drop pod got cheaper and can now turn 1 deep strike, opening up a lot of shooting and assault potential on the first turn. Emperor’s Children and specifically Noise Marines make it out far and above on top; be prepared to see a Noise Pod coming down turn 1 in the near future.