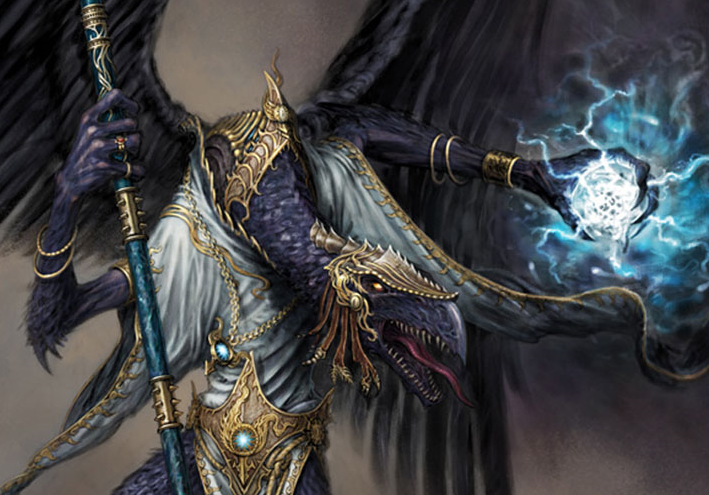 It’s finally here! Five months into 9th Edition, Forgeworld delivered on their promise of updated datasheets for 9th Edition. While Daemons were never a faction that relied heavily on FW units for either competitive or casual play, they had some special Characters and Lords of War that desperately needed new points costs and datasheets.

In the big picture, if you’re a casual player that just had some of these models and wanted to run them, you should be happy. None of these units are awful, and you can bring any one of them to a casual game night and be satisfied with what you’re getting. However, if you were a competitive player and was hoping that the FW rules update would elevate any of these units into serious options, I think you’ll be disappointed (with a few exceptions, which I’ll discuss below). This was a good update for Daemons overall but there were definitely some missed opportunities. Let’s dive right in.

I took one look at the datasheet, and immediately didn’t like the rules. Uraka lost the Unstoppable Ferocity rule that all other Khorne Daemons get (+1 Attack and +1 Strength), instead getting a simplified version of its gimmicky rule that requires you to kill 8 models to get the same benefits and +1″ Movement. Uraka also received +1 Wound and +1 Attack and a longer range and simplified ranged attack.

But then I flipped to the points, and I had to give Uraka another look. For 145 points? 6 S9 AP3 3D attacks on a model that’s also giving a reroll 1’s aura is really not bad. You also receive the practical benefit of no longer having to do the bookkeeping required to check which benefits you received at 5 different tiers of models killed.

If you’re running a Khorne Daemon Prince on foot, Uraka should replace him now as Uraka is basically strictly better and costs fewer points. So then the question becomes, who is running Khorne Daemon Princes on foot and needs an upgraded version of that?

Absolutely no one. Give Uraka a look if you’re committed to running pure Khorne Daemons, otherwise steer clear.

There is a lot to like on this datasheet. Much like Uraka was for Khorne, Mamon is a strictly better version of a Nurgle Daemon Prince without wings. His ranged weapon got significantly better, while his melee profile became more consistent.

The main thing Mamon Transfigured received was a massive points drop, going down to 130 points. In addition, his reroll aura now benefits all Nurgle Daemons instead of just units with <The Tainted> keyword, so he has actual synergy with the rest of the army.

Small Nurgle Characters continue to be winners in this update, as Cor’bax Utterblight comes out of this looking much better than before.

Don’t look at Cor’bax and think that because he’s a targettable Character at 12 Wounds, he isn’t worth running. After his points drop, he costs roughly 2/3 as much as a Great Unclean One and has 2/3 of the Wounds, which is fair. He also comes with T8, an additional psychic deny, and benefits from Obscuring terrain. He is also much more maneuverable since he comes on a smaller base and doesn’t get blocked by narrow alleys between terrain pieces.

Now that we’ve wrapped up the smaller Characters, it’s time to move on the bigger Daemons in the Lord of War slot. Let’s start with the biggest one of all: Scabeiathrax The Bloated.

Scabeiathrax received some overall minor nerfs on his datasheet, which were paired with a significant points drop. He is now Toughness 8 instead of 9, and his Strength now starts at 8 instead of 10, and his Attacks start at 5 instead of 6… but dropping all the way down to 475 points offsets those issues. He also dropped down to 2 psychic casts and denies, although there are few important Nurgle powers so you generally already have enough Psykers to cast everything you need in a Nurgle heavy army.

His 6″ aura of giving -1 to Hit in melee now applies to Nurgle Daemons only rather than both the Nurgle and Daemon keywords, but it will continue to apply across codices to other Nurgle Daemons like Mortarion or Possessed.

The main issue is now that he is only T8 instead of T9, it’s very hard to justify running Scabeiathrax over a Great Unclean One with the Exalted upgrade to become T8. If you were already running the model then you will be very happy with the new points cost, but losing T9 takes a lot of the flavor away from the model. At least his explosion aura no longer effects Nurgle units, so you’re not risking hurting your own army when you inevitably lose him.

You know what’s one of the best ways to increase a unit’s competitive viability?

Cut it’s points cost in half, and then drop it an additional 50 points.

Now a practically cheap 700 points instead of the absurd 1500 points he cost before, Alphabet Soup is back on the menu.

The Staff of Catachlysm got it’s ranged attacks cut in half (and lost the cute gimmick where it produced Flamers after slaying enough opposing Infantry, which was hilarious but completely irrelevant to its viability), but it’s melee stayed roughly the same. It remains as durable as ever, staying at 27 Wounds and T8 with a 4++ invuln. He also continues to receive +1 to Psychic tests, even on the bottom bracket.

An’ggrath is a big winner, even if he remains a bit too expensive for what he provides. Dropping from 888 points to 550 points is great, as is gaining a sweep profile for his axe in melee, but he’s just not quite there yet. If you were running a melee Knight, An’ggrath now compares favorably and provides more value in that role, but melee Knights are not something that competitive Daemons lists benefit from souping in.

The issue with An’ggrath is that for less than an additional 95 points, you could bring a Khorne Daemons Patrol consisting of two Bloodthirsters and a 20 strong Bloodletter bomb that will provide more offensive threats and significantly more versatility. An’ggrath is certainly a playable option now, but the lack of improvements on his ability to get into combat will continue to hamper him.

Zarakynel is the only Daemon Lord of War to receive not only a points drop, but also a signficantly upgraded datasheet. She received two big durability buffs, getting a permanent -1 to Hit (which finally provides her with some ranged protection she desperately needed) along with the ability to heal d6 Wounds at the end of any Fight phase where she slays any non-Vehicle models. Her claws also now provide 6 additional attacks instead of just being another melee option, and she kept the Mortal Wound generation on her sword. She also received the 14″/12″/10″ Movement of her Keepers of Secrets sisters, instead of capping out at 12″ of Movement previously.

I love, love, love this datasheet. Which makes it an absolute shame that she is almost impossible to justify running competitively.

She costs twice as much as a Keeper of Secrets, but just isn’t as valuable as having two Keepers of Secrets with Exalted upgrades. At only 18 Wounds, -1 to Hit just isn’t enough to protect a 450 point model. She needed some sort of intrinsic Feel No Pain/damage reduction–or further points drops–to see the table, not increased killing power from what was already one of the most dangerous datasheets in the game.

Zarakynel is a great note to end on, because she continued the trend of what we have seen with all of the Daemon Lords of War: Greatly improved, a strong option for casual play, but just not providing enough additional value over Greater Daemons with Exalted upgrades to justify running competitively. Daemons players* should still be very happy, as every single unit in the book got much better with their new points costs and datasheets. As always, stay safe and may the Dark Gods bless your rolls.

* Except for people running Samus, who are justified in being disappointed that Samus’s datasheet was removed from the game. At least you now have a really cool looking Daemon Prince model!